Club member Jim Sweet's son Jay came across this unusual car. It was a concept car built by Buick starting with a 1961 Buick Electra 225 (otherwise known as a "Duce an a Quarter"
The article below was written by Jeff Stork and appeared on the Palm Springs Automobilist website. 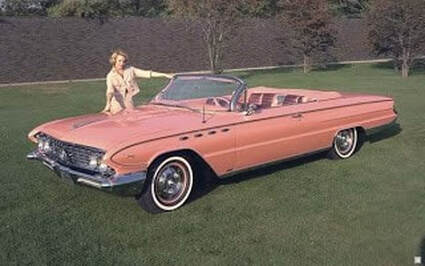 Recently I showed you Bill Mitchell's Buick 1956X Century, which had many custom touches including lowered suspension, wire wheels, a two tone metallic special paint scheme and special floating bucket seats including a passenger seat that rotated 180 degrees. I've been in touch with the current owner of the car who reports that it was found quite intact except that the bucket seats and rear seats were missing. In their place were conventional bench seats front and rear with the S. O. number of the 1956X on a tag underneath.

But where did the bucket seats go?

I don't have an answer yet, but I have an idea.

Were the 1956X seats recycled into the Flamingo?

Can't say for sure, but there is a precedent.

In my old files from Buick, I have most of the correspondence regarding XP-810, Mitchell's original Silver Arrow, S. O. 40210. Here is a quote from a memorandum of October 15, 1962, concerning the interior of the car:

"Astra" front bucket seats to be installed. These will be furnished by making use of the seats being removed from the 1962 Buick Skylark Convertible advance interior car (S. O. 40224). The existing six way adjuster on the driver's seat will be reworked to fit the Riviera underbody conditions, while the passenger's seat is to remain as a stationary seat.


The memo goes on to stipulate that the entire interior is to be retrimmed, so the appearance of the seats could change completely.

While I'm not claiming that the 1956X seats were used in the Flamingo, I'm entirely convinced that they were replaced with conventional bench seating and the floating bucket seats were retained for reuse in another car, whether it was the Flamingo or another car of the era.

I guess General Motors caught on to the idea of recycling before the rest of us did.