WAAAM Tour
On Saturday, May 21 we had a great turn-out for our trip to the Western Antique Aeroplane & Automobile Museum. And our numbers were doubled with the addition of members of the Early Ford V-8 club.
We met at the Columbia Gorge Outlet Mall in Troutdale. It was a great show with several Classic Thunderbirds, a few Retro ‘Birds and a variety of Early Ford V-8’s. After the obligatory instructions for the day, we began the parking lot exodus when one more ’57 Thunderbird came pulling into the lot. Don Landers and his son Don Jr. arrived to join us. We knew they were coming as Don’s grandson was already there and we had given him the written instructions. However, Don’s car was leaking water very badly and of course it appeared to be a 100-year-old Stanley Steamer based upon the steam coming out of the engine compartment. Don thought it was okay so the rest of us headed out to join those already on the way. Unfortunately, we never saw Don make it to the museum. Being concerned about their situation I called Don a day or so later.
According to Don they bought more anti-freeze and put it in the radiator. Don’s grandson talked him into leaving the car there to cool completely. They then drove on to Hood River in the grandson’s car and got to the museum shortly after we left. Later they got the Thunderbird home and found several hose clamps a little loose. After replacing all the clamps everything appears to be okay. They have run the engine hard, and no leaks have appeared.
Upon the club’s arrival at the museum we made sure that all had paid so that we could write one club check so that we could get the group price. Even the V-8 club paid our club so that all of us entered on one group payment.
Since the last time we were at WAAAM they have added more hanger space, more cars, and more airplanes. If you were to walk around and read the placard on every display it would take more than a full day. Former club members Pat n’ Pat Brothers have their 1941 Packard Model 120 on loan to the museum, so it was naturally on display. Several years ago, they drove this car in the “Great American Race” from coast to coast. If you aren’t familiar with this race just Google it, quite a story & adventure. In 2006 they drove their ’56 Thunderbird in that race. Their Packard was next to a 1981 Avanti II. When I bought my T’Bird in 1966 I was looking for either a good condition T’Bird or Avanti. I am so glad I found the “right” Thunderbird first, but I still think the Avanti is one of the best-looking cars ever produced. Studebaker was years ahead of other manufacturers with its design – sleek, beautiful, and always futuristic looking.
After several hours of viewing we got back on I-84 and stopped in Cascade Locks for lunch at the Bridgeside Café. I’d never been there so I was surprised it was not a table-service restaurant, but cafeteria style. Fortunately, no one was upset with me for this as most had been there before. Their backroom was reserved for us. We ended up with 38 at lunch: 21 V-8ers and 17 Thunderbirders. Three of our club skipped lunch and went their own way leaving the museum. We were all impressed at how fast they got the food out. People started drifting out in small groups, so our return to Portland was very scattered down the freeway.
A call later that evening from Dennis Leedom let me know that the WAAAM website had taken a few pictures of our cars and placed them on their website. I checked that out and found only one photo. It has the Sharp’s ’57 green Caddy Bird and in the background Don Smith’s blue ’64 Thunderbird convertible, Mike Walsh’s blue ’57, Shelley Robert’s white ’56, the nose & RF fender of Sieg Lemke’s Mustang along with a 1937 Lincoln and either a ’50 or ’51 Woody from the V-8 club. I’ve pulled the image above off their website for our website and the Bird Watcher.
It was a great day; it seems that everyone had a good time. And I felt a lot better once I knew that Don Landers was able to get home safely. 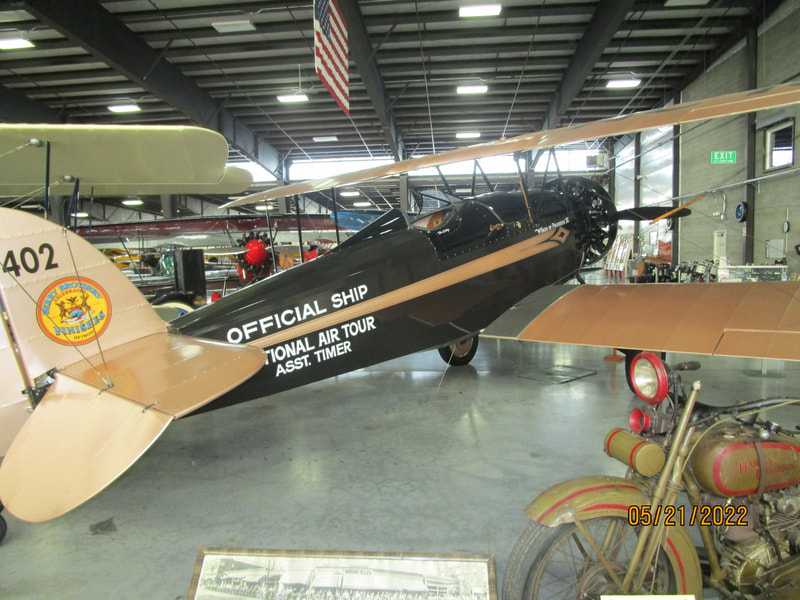 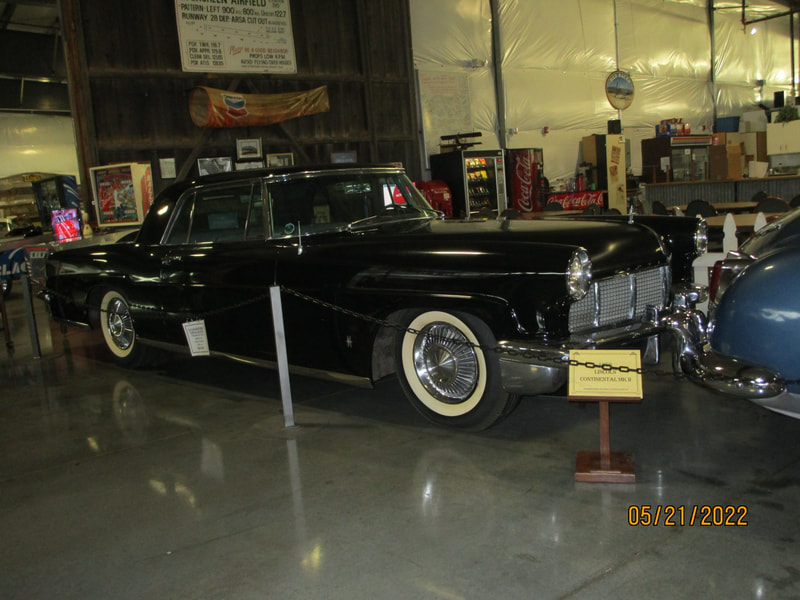 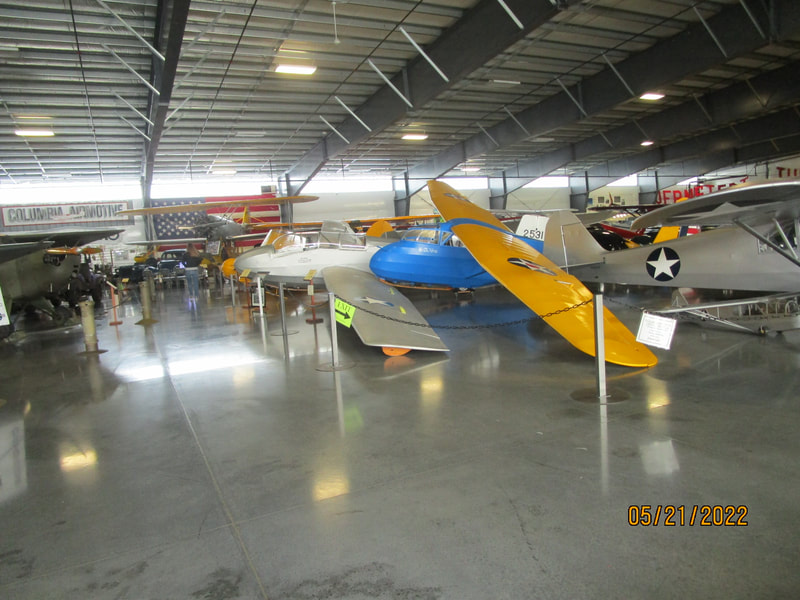 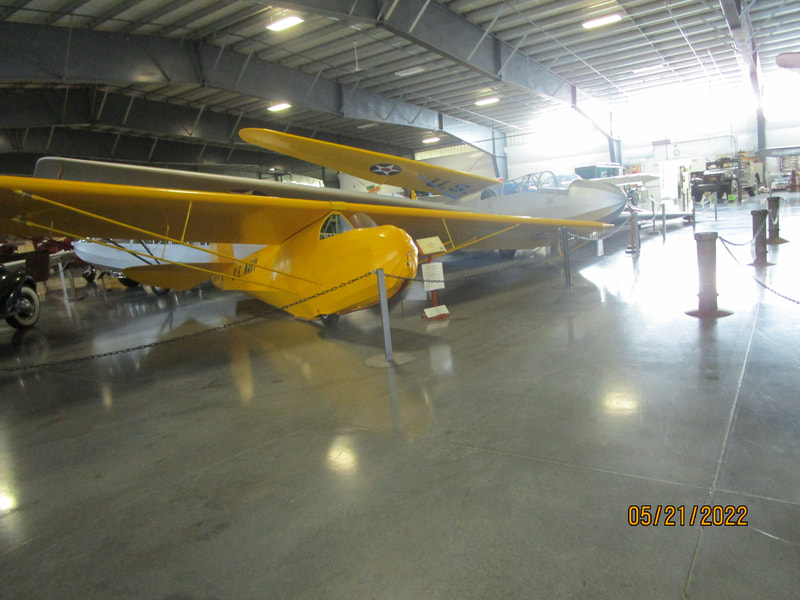 Stacks of gliders - and there were even more in another area 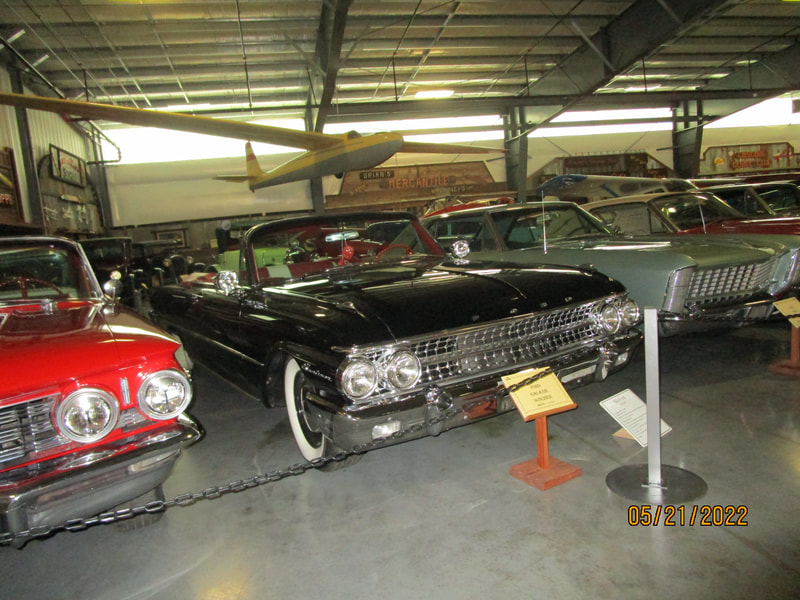 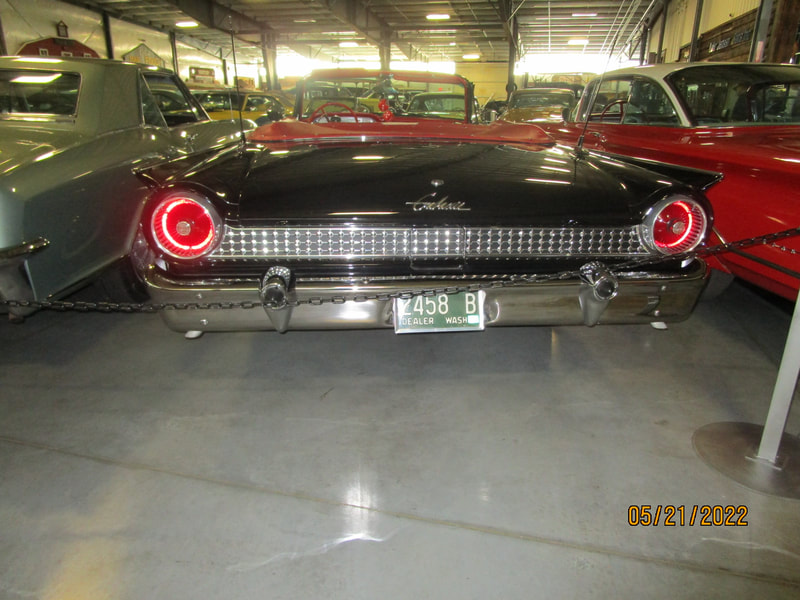 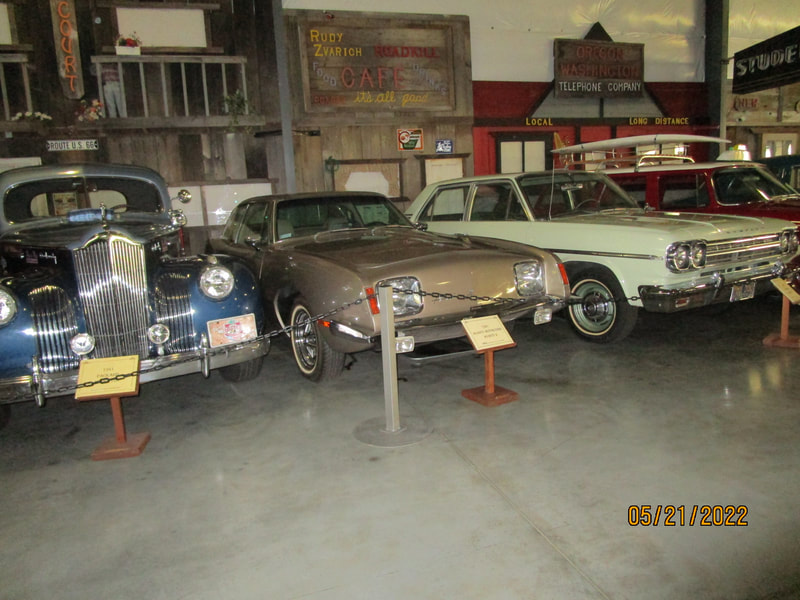 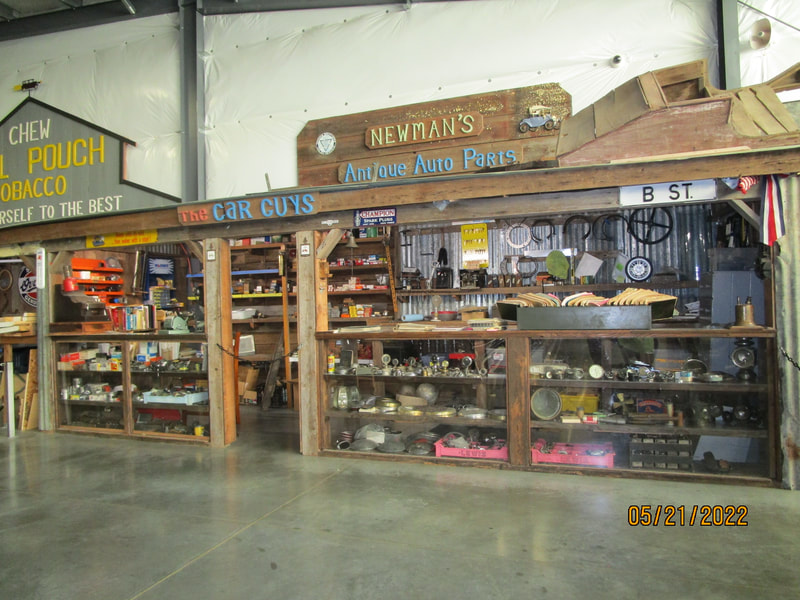 A 1981 Avanti II and a replica antique parts store 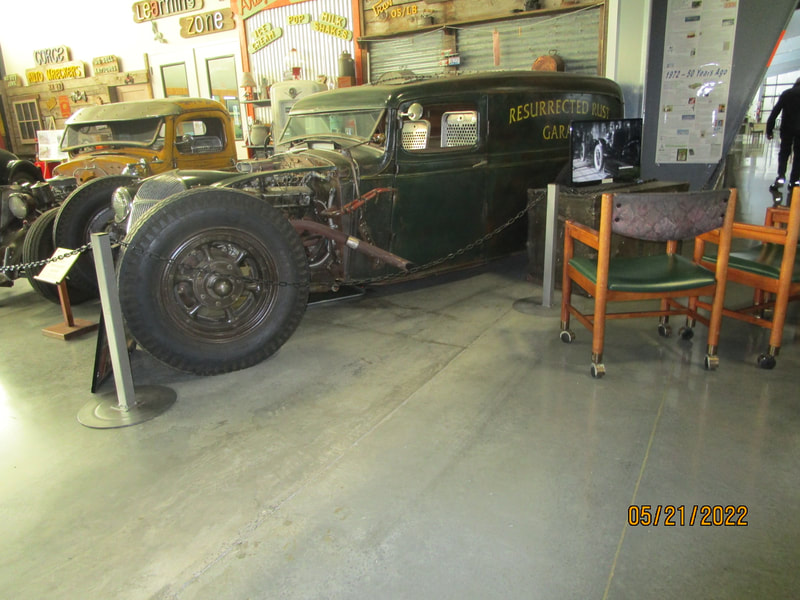 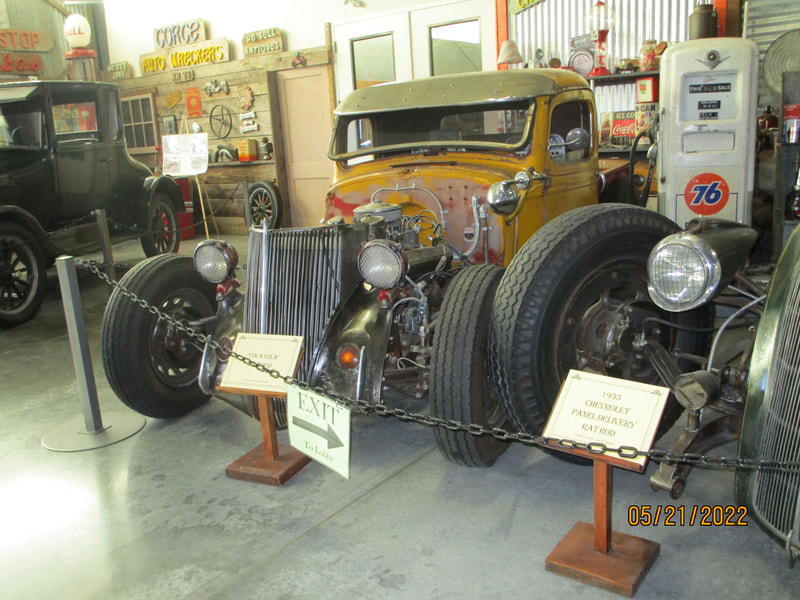 A pair of nice Rat Rods 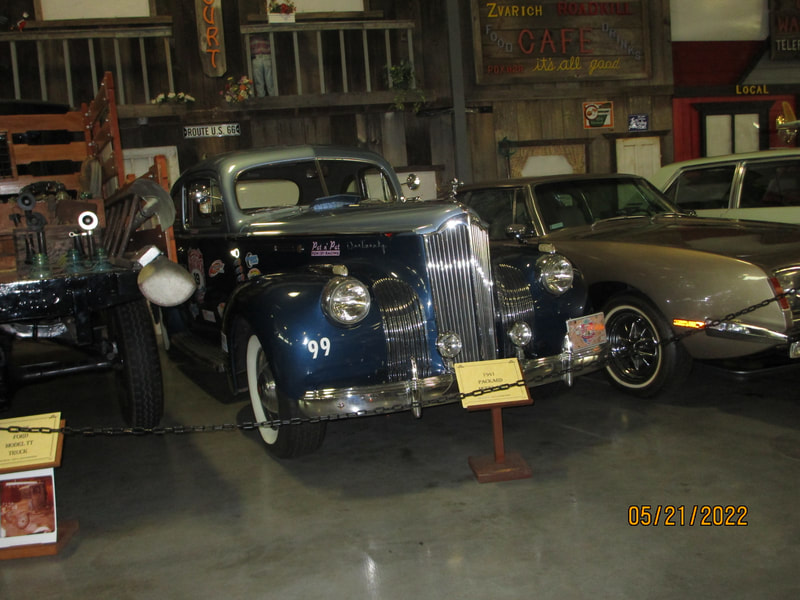 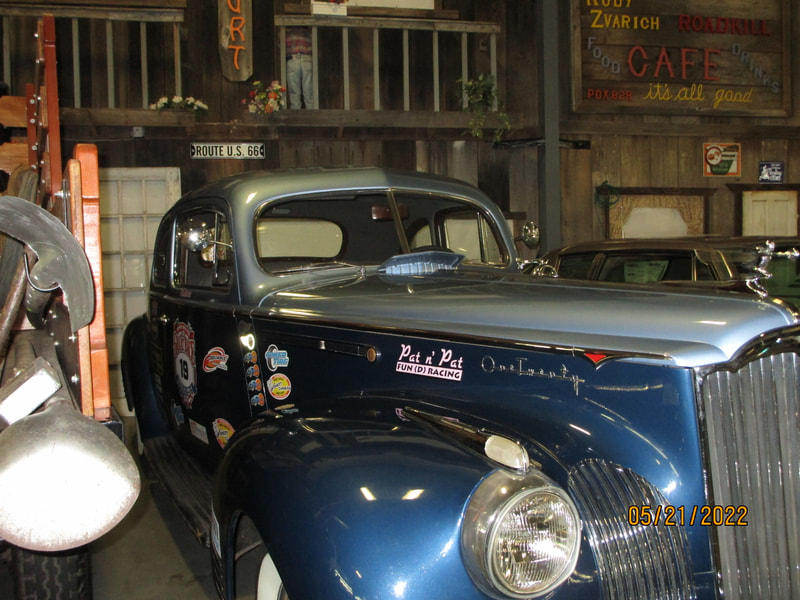 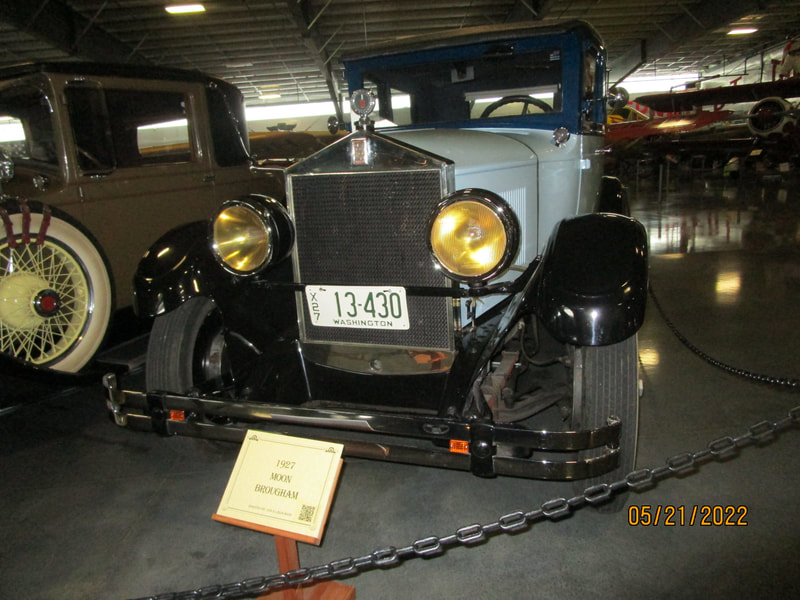 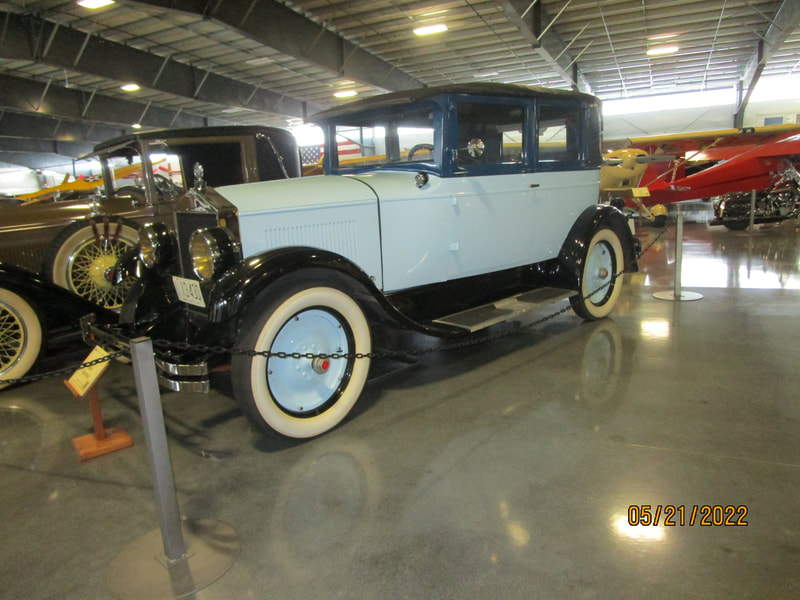 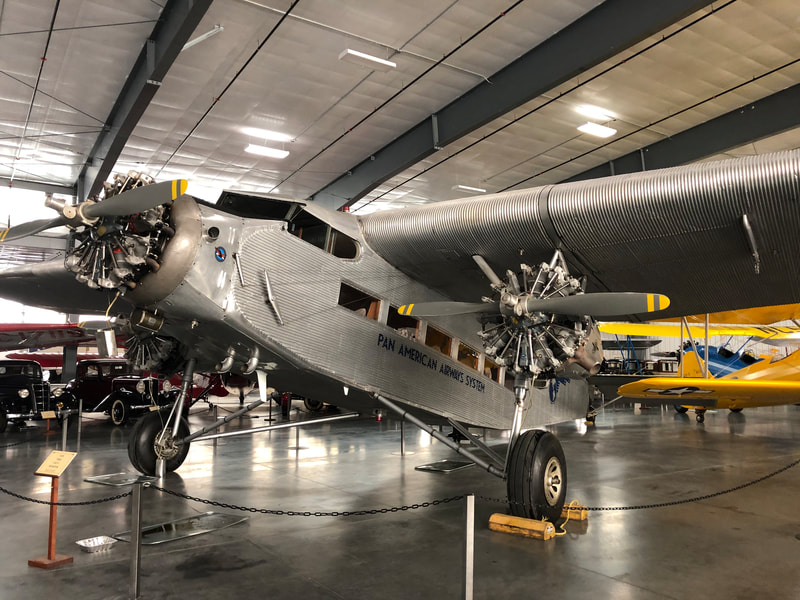 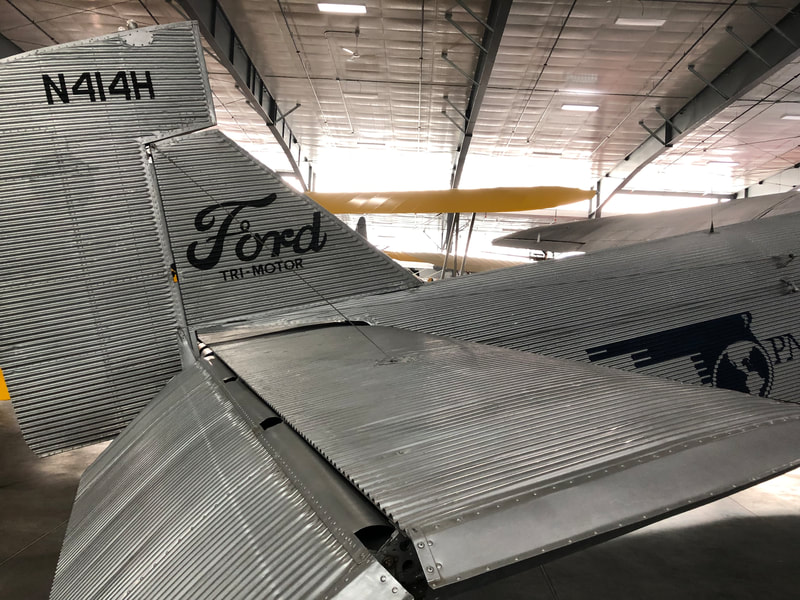 A very different kind of Ford. Prior to WWII Ford got into the airplane manufacturing business with this famous Tri-Motor. It was primarily used for US Mail and some passenger work. Of course during the war they built thousands of bombers for the Army Air Corp.

All the photos below are from the Bridgeside Cafe
Unfortunately being backlit with windows some
of these are a bit hard to see. 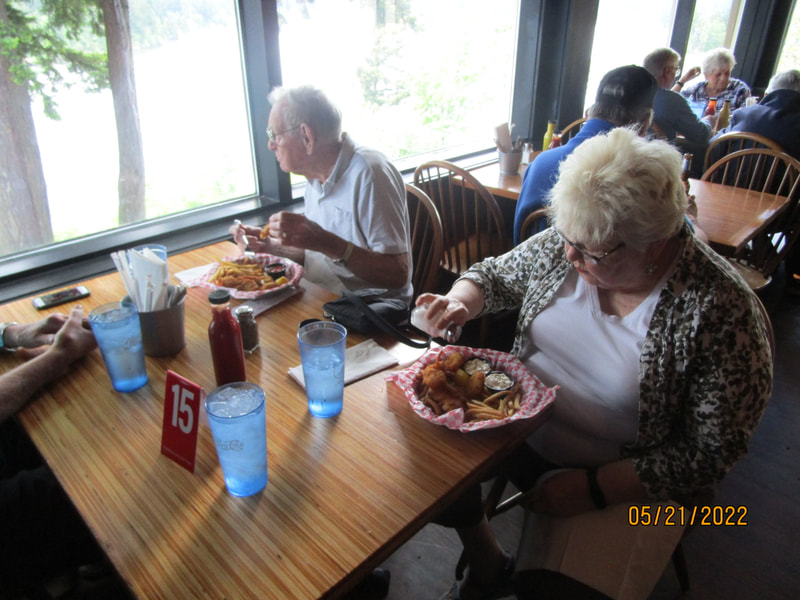 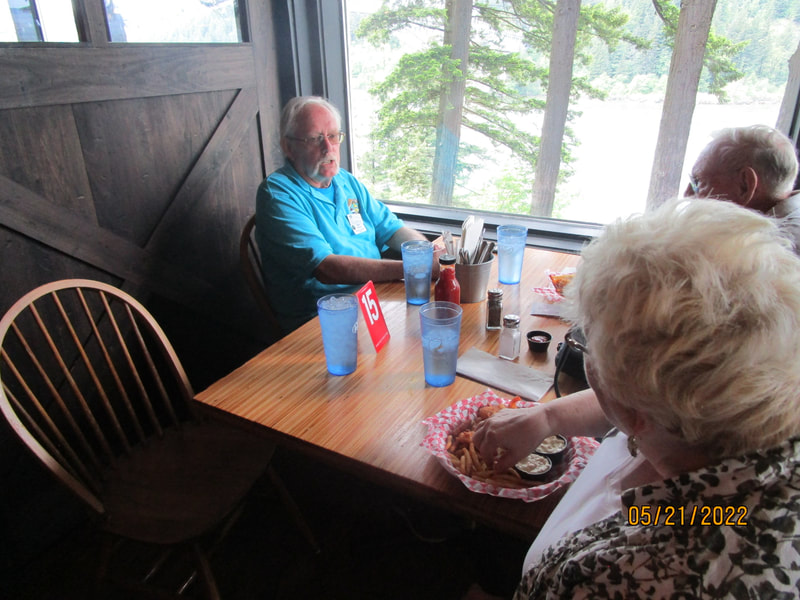 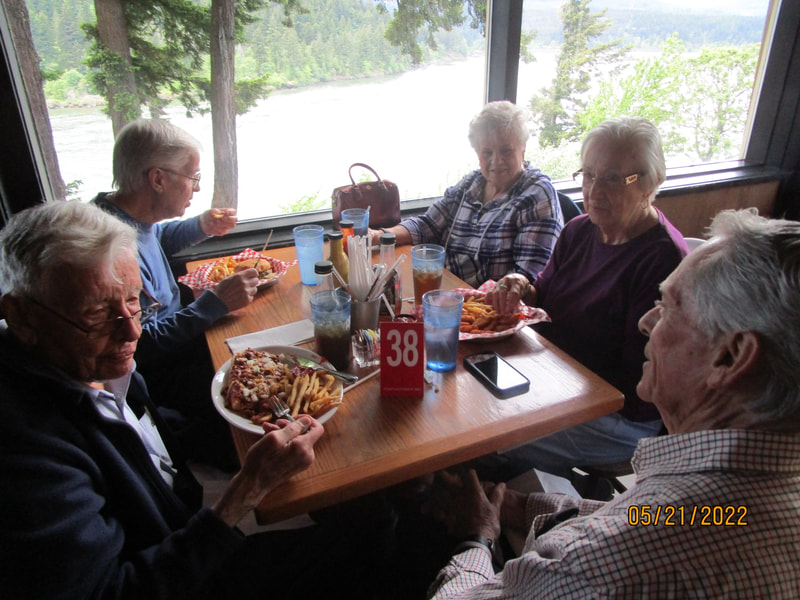 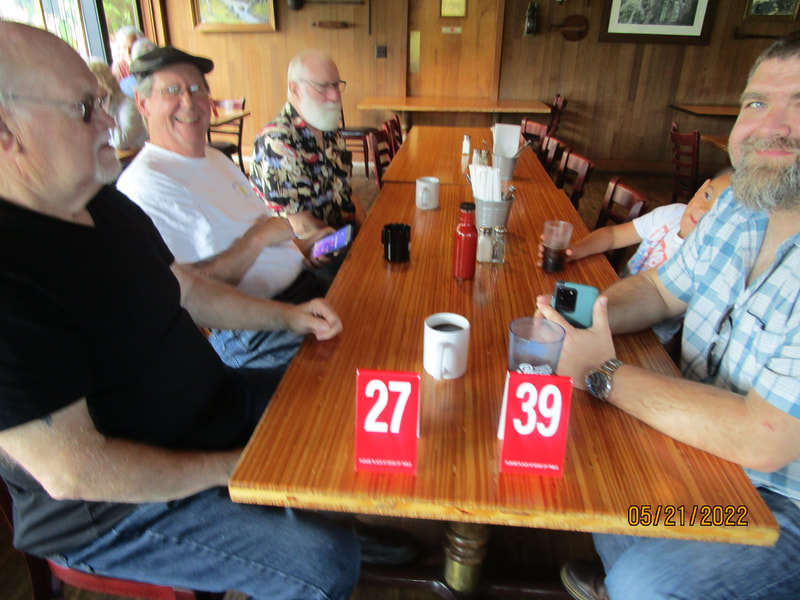 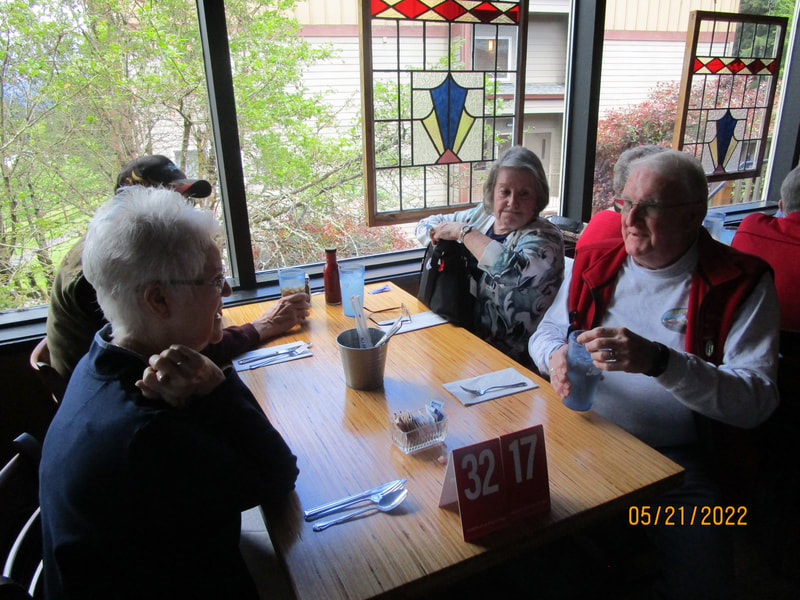 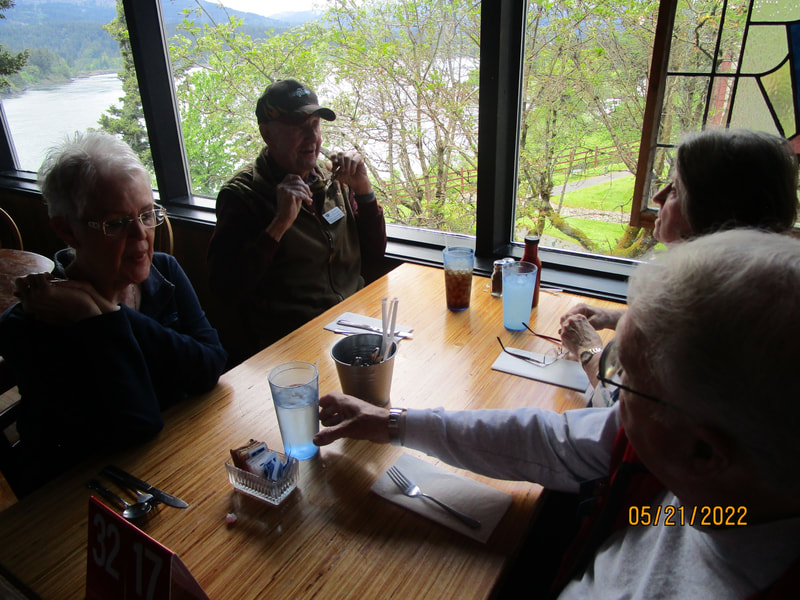 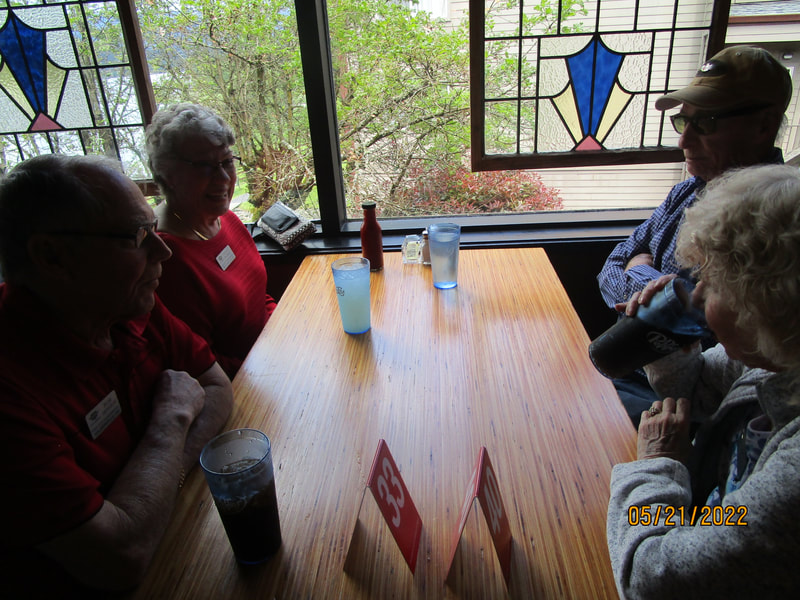 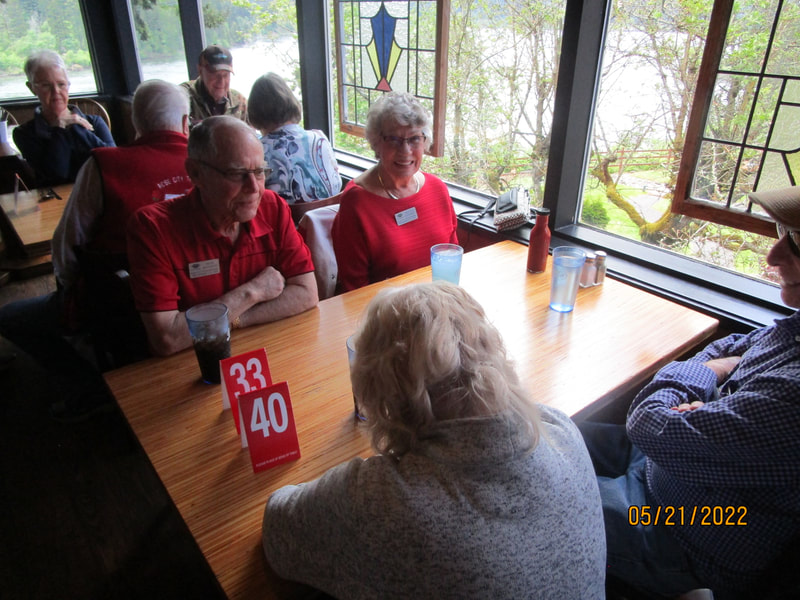 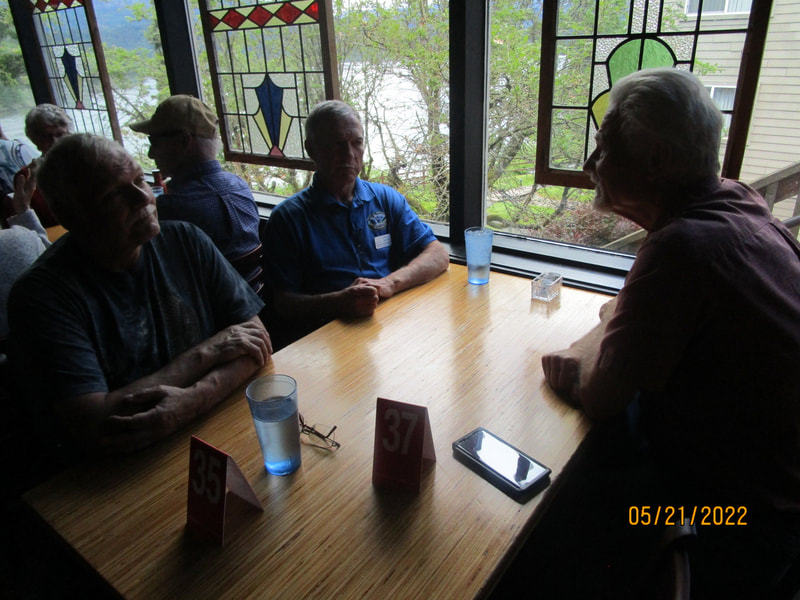 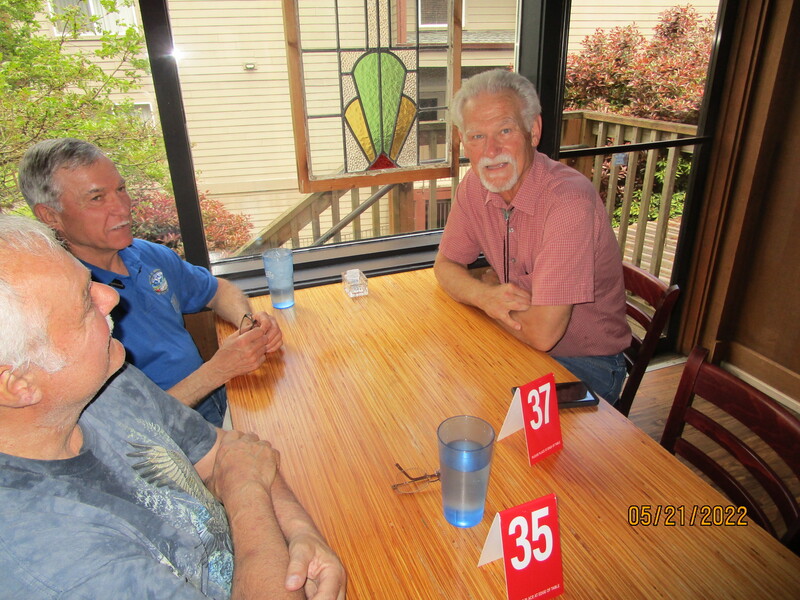 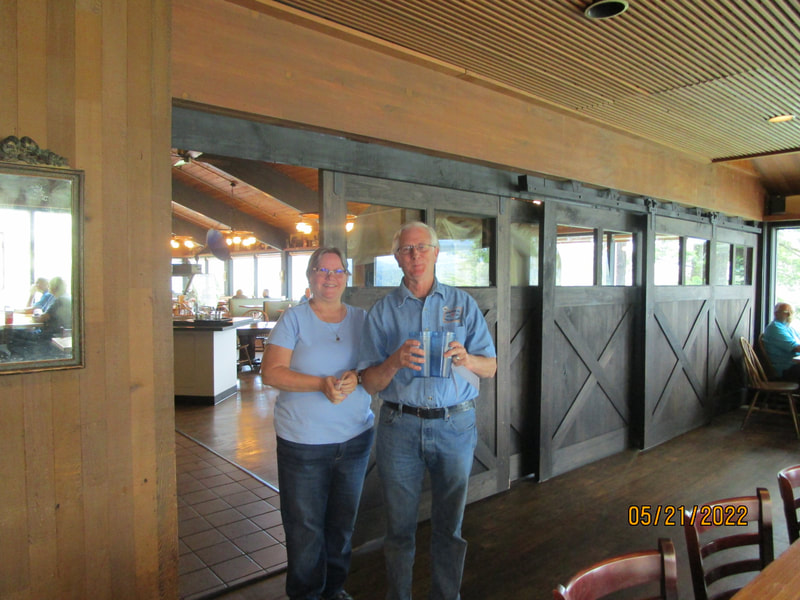 Thanks to Shelley Roberts for several of the photos above.