Rosecitythunderbirds.org
I came across this article about winterizing your Thunderbird on a Yahoo group I belong to related to 1955-1957 Thunderbirds. Personally I think he is going a bit overboard but each idea is a good one.

I’m sure if you talk to each classic car owner you will get a different opinion on how to store a classic car, but since this method works for me I thought I would share it.

First of all, I’m the type of guy that likes to do everything now, so that when spring rolls around I can simply get in the car and begin enjoying it for another season.  I start by changing the oil and filter.  Old oil contains contaminants, especially if you use the car infrequently and on short trips.  I perform any routine maintenance that is due, and I don’t forget to service the air and fuel filters.  I check to make sure I have a 50/50 mix of antifreeze and water in the cooling system, which will show -34 degrees Fahrenheit on an antifreeze tester.

Your car's biggest villain is rust, that’s why I clean the car inside and out, and wax it prior to putting it in storage.  For extra protection, I generously wax the bumpers and other chrome surfaces, but I do not buff out the wax.  Mildew can form on the interior; to prevent this I treat the vinyl, plastic and rubber surfaces with a product such as Armor All.

Ideally, you car should be stored in a clean, dry garage.  I prepare the floor of the storage area by laying down a layer of plastic drop cloth, followed by cardboard.  The plastic drop cloth and cardboard act as a barrier to keep the moisture that is in the ground from seeping through the cement floor and attacking the underside of my car.

Now it’s time to prepare the car for hibernation.  I drive the car to the gas station and add fuel stabilizer in the amount recommended on the bottle.  Then I fill the fuel tank to the top to prevent condensation from forming in the fuel tank while the car is sitting in storage.  By adding the fuel after the stabilizer, it will mix thoroughly in the fuel tank.  I am fortunate that there is a gas station near where I live that sells 100% gasoline.  That is the only kind of fuel that I have ever used in my Thunderbird.

Now comes my favorite part, I take the car for a long drive!  By doing this l accomplish several things.  First, you will circulate fresh oil through the engine, much of which will remain there to prevent rust until spring.  Second, you will burn off many of the contaminants in the oil, one of which is water.  Third, you will get the exhaust system hot enough to burn off any moisture, thus preventing, or minimizing, rust in the exhaust system.  Most exhaust systems rust from the inside out, not the outside in.  Fourth, a trip that is long enough to get the car up to operating temperature is also long enough for the fuel you treated with fuel stabilizer to reach the carburetor and all of its small passages.

I inflate the tires to 5 Psi over the maximum pressure indicated on the sidewalls.  Keep in mind the tires are warm, and the inflation pressure will drop when they cool off.  When I park the car in the storage area, I park it so the tires sit on top of carpet squares.  I never put the car up on jack stands.  Suspensions were not designed to hang in mid-air for months at a time.  The tires were designed to sit on the ground for their entire life, and by over inflating the tires flat-spots should not be an issue.

To deter rodents from entering my classic car while it is in storage, I have found that one of the best things to use is multiple sheets of a fabric softener inside the car.  There is very low odor associated with the fabric softener sheets after taking the car out of storage, yet rodents hate the smell of them.

The final step is to fog out the engine.  I do this once the car is parked where it is to be stored for the winter, and while it is still warm from its trip.   I remove the air cleaner and spray engine fogging oil into the carburetor with the engine running at a high idle.  Once I see smoke coming out of the exhaust, I shut off the engine and replace the air cleaner.  Fogging out the engine coats many of the internal engine surfaces, as well as the inside of the exhaust with a coating of oil designed to prevent rust formation.

I do not start the engine periodically, because I feel that it does more harm than good.  Most engine wear takes place when an engine is started cold.  This is made even worse when an engine that has been sitting for an extended period of time is started, because much of the protective coating of oil on vital surfaces will be minimized or removed all together.

Finally, I remove the battery, put it on a maintainer, put the car cover on and let my car hibernate for the winter months. 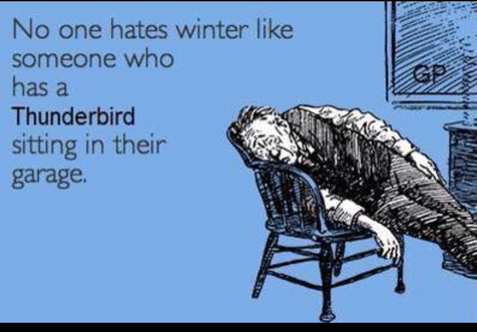